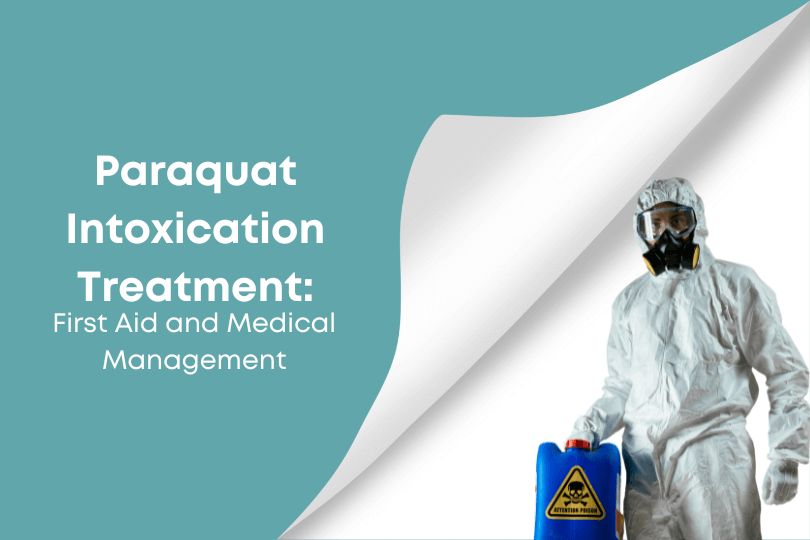 Intoxication is a word that is often associated with alcohol or drugs. However, there is also a risk of intoxication for individuals who handle toxic chemicals such as herbicides. For instance, the popular herbicide paraquat can cause fatal intoxication or poisoning when ingested, inhaled, or absorbed by the skin.

Paraquat intoxication is the leading cause of pesticide-induced mortality in many countries that still heavily use paraquat in agricultural and non-agricultural settings. That’s why it comes with little surprise that the chemical has long been under scrutiny for its health effects.

In fact, thousands of plaintiffs across the United States have filed a paraquat herbicide lawsuit, claiming that long-term exposure to paraquat caused their Parkinson’s disease. The weed killer has also been controversial for its effects on animals and the environment, which had advocacy groups and environmental organizations pushing for a paraquat ban until now.

What is Paraquat intoxication?

Paraquat intoxication refers to clinically significant physical or mental symptoms following exposure to paraquat dichloride. It occurs when an individual ingests, inhales, or absorbs a lethal amount of paraquat through the skin.

Paraquat poisoning is also a growing concern in many developing countries, where it is readily available and being used by some people to commit suicide.

Can Paraquat be detected in the body?

Yes, paraquat can be detected in the body, particularly in the blood and urine. Some methods used to detect amounts of paraquat in the blood are ultraviolet spectrophotometry, chromatography, and capillary electrophoresis.

Following paraquat exposure, the highest amount of paraquat can be detected in the lung tissue of humans and animals for up to four days after ingestion.

Is there a Paraquat test kit?

Yes, there is a paraquat test kit called urinary sodium dithionite test which is available in many laboratories across the country, and some test kits can also be ordered online in different websites.

The paraquat urine detection test kit requires a person to obtain a urine sample, ideally four to six hours after suspected paraquat exposure. There are also test kits that can detect traces of paraquat in animals, water, and even fruits.

What happens after Paraquat Poisoning?

After paraquat poisoning, the immediate signs of intoxication often show up, including pain and swelling of the mouth and throat and other gastrointestinal symptoms, such as abdominal pain, nausea, vomiting, and bloody diarrhea.

The paraquat mechanism of action triggers these symptoms, as the chemical causes direct damage to the lining of the stomach and mouth when it comes into contact with these organs. After that, paraquat inflicts further damage to the body by causing toxic chemical reactions throughout the other organs, including the kidney and the liver. 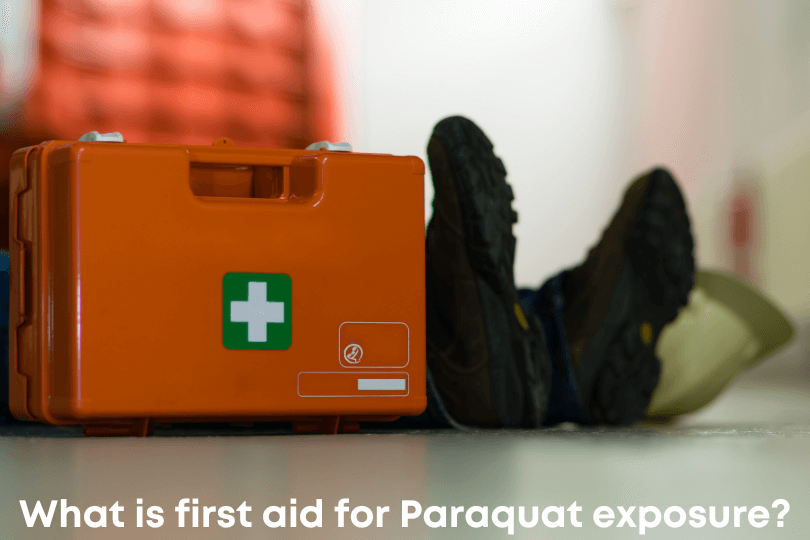 What is first aid for Paraquat exposure?

Seeking timely treatment is a key factor for surviving the permanent side effects of paraquat poisoning. But there are also things you can immediately do in case of suspected exposure to paraquat. The first aid management strategies for paraquat exposure are listed below.

How is Paraquat Poisoning Treated?

Early identification of paraquat intoxication and timely administration of treatment are the cornerstone of management. The most common ways of treating paraquat poisoning are listed below:

The first method of treatment should be aimed at preventing further gastrointestinal absorption of paraquat. Physicians routinely give adsorbent substances such as activated charcoal and Fuller’s earth. Gastric lavage, especially without the use of an adsorbent, is typically not recommended as it has not shown any clinical benefit. It can also cause complications, such as aspiration, electrolyte imbalance, and paraquat organ damage through mechanical injury to the throat, esophagus, or stomach.

2. Removal of paraquat from the blood

Hemoperfusion is a tool for blood cleansing and is sometimes considered for removal of paraquat from the blood. However, evidence exists that its benefits may be limited because paraquat is eliminated rapidly from the body, which means it can only remove a modest amount of the chemical from the system. Furthermore, the timeframe in which hemoperfusion is most effective is very short (within only two hours post-ingestion). Starting the procedure any time after that is unlikely to change clinical outcomes.

Immunotherapy is the treatment of disease by using the body’s own immune system. When it comes to paraquat intoxication, immunosuppression, or dampening of the immune system, is widely practiced. It is often done with dexamethasone, cyclophosphamide, and methylprednisolone. The theory is that immunosuppression interferes with the acute inflammatory response caused by paraquat and, as a result, inhibits the processes that lead to pulmonary fibrosis and eventual death. However, its evidence for efficacy is still very weak. Antioxidants are also widely used as treatment for paraquat poisoning, including vitamins E and C, N-acetylcysteine (NAC), and salicylic acid. They are believed to be beneficial through free radical scavenging and anti-inflammatory actions.

Other treatment recommendations for paraquat intoxication include ventilation, medications, and intravenous fluids. Ventilation is used to improve breathing following paraquat poisoning, especially during the early onset of symptoms. However, ventilatory support is often futile in severe cases. Medications, on the other hand, are also used to reduce symptoms such as difficulty breathing and low blood pressure. Lastly, intravenous fluids or fluids given through an IV needle are supportive treatments that help replace water or sugar a patient may need as swallowing becomes difficult for them after paraquat poisoning.

Can you survive Paraquat poisoning?

Yes, you can survive paraquat poisoning, especially in its acute stages, but not without the lasting effects. In milder cases, some patients have managed to survive paraquat intoxication, especially those who presented early to the emergency room to seek medical attention.

However, in severe cases, the risk of permanent side effects is high, including lung scarring, kidney failure, heart problems, and esophageal scarring, to name a few.

But this is not the case for everyone. It is worth noting that paraquat poisoning is still the leading cause of pesticide-related death in many developing countries, and in the U.S., thousands of people have filed a paraquat lawsuit targeting the chemical, filed by individuals who developed Parkinson’s disease and other health issues after exposure to it. 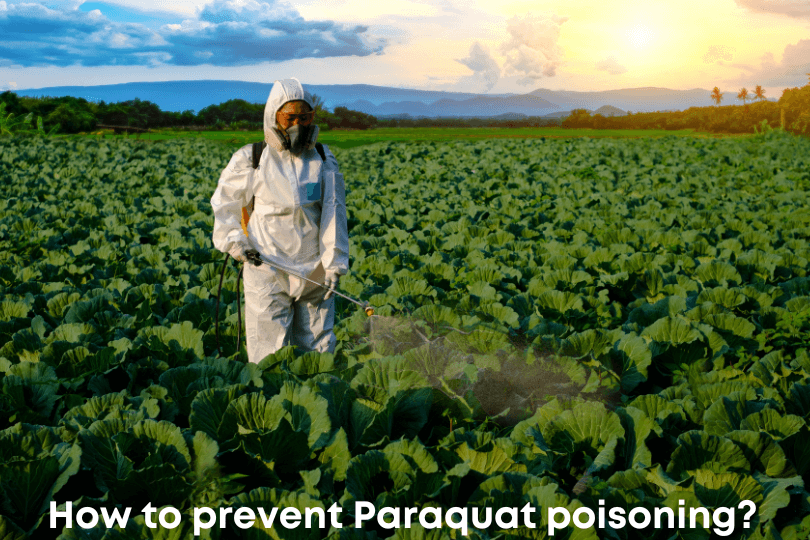 How to prevent Paraquat poisoning?

Paraquat poisoning can be prevented by simply reading and understanding everything that is indicated on the label of the product before using it. The key to paraquat safety is following the directions and detailed information contained on the label on how to use the herbicide correctly and legally.

Labels are also legal documents that contain information on potential dangers associated with a product and instructions one should follow on mixing, applying, storing, and disposing of it. The paraquat label is your guide to using the weed killer safely, as it also contains directions on first aid in the event of poisoning.