IVC Filters – A necessary evil or an unreasonably dangerous device?

Inferior Vena Cava Filters are dangerous medical devices meant to reduce the risk of pulmonary embolism. They have been associated with high risk of breakage and malfunction.

These filters were meant to be used on a temporary basis only, but manufacturers kept marketing them for years as a permanent solution. Filters were not removed even when the need for filtration was over.

Thousands of patients were not aware that the risk of developing a serious complication increases the longer the device is kept in place. As a consequence, many suffered grievous injuries after a metal fragment perforated one of their organs.

What is an IVC Filter and when should they be used?

Pulmonary embolism (PE) is a life-threatening condition that occurs when a blood clot (thrombus) travels to the lungs from the arms or legs.

Roughly 60 to 70 Americans every 100,000 suffer from PE, although silent (and even more lethal) forms of this condition can develop in 40% – 50% of patients with deep vein thrombosis (DVT). If untreated, PE can lead to a mortality rate of roughly 30%, with up to 10% of acute PE patients dying suddenly.

According to the Centers for Disease Control and Prevention (CDC) about 60,000-100,000 Americans die every year of PE, and 10 to 30% of them die within one month of diagnosis.

Usually, the preferred therapy to prevent this risk consist of blood thinner medications such as heparins, warfarin or antiplatelet drugs that stop clots from forming. However, when a high risk of bleeding is present, or the use of some of these medications is contraindicated, the IVC filter represents a valid alternative to these drugs.

These medical devices are temporarily inserted inside the vena cava to be later retrieved within a short time. Note that the circumstances where they are actually indicated are quite limited, so their widespread use is often unmotivated.

In particular, the U.S. Food and Drug Administration (FDA) approved the use of these filters only in the following conditions:

The FDA warning and the off-label use of IVC filters

In August 2010, after receiving 921 adverse reaction reports in five years, the FDA warned the public about a serious risk of device fragmentation and migration, embolism and perforation of the inferior vena cava.

In practice, the longer these devices are kept inside the patient’s body, the higher the risk of breakage. The regulatory agency enforced its safety alert announcement in 2014, explaining that the IVC filters should only be used for short-term placement in patients in which PE subsided.

In particular, once the risk for PE has passed, the risk/benefit profile favors the use of IVC filters for no more than 1 – 2 months. In other words, keeping the device in place for more than 60 days only exposes the patient to more risks than removing it altogether.

In its updated recommendation, the regulators explicitly stated that they should be removed between the 29th and 54th day after implantation.

However, the off-label use of IVC filters outside of FDA-cleared indications is extremely common, and accounts for more than 50% of the devices implanted in the United States. Some of them are left in place for years, or even permanently.

Why is this device dangerous?

IVC filters are discomfortingly prone to breaking apart, causing their fragments to migrate to other organs such as the lungs or heart, puncturing or perforating them. Complications include serious internal bleedings, organ damage and even death.

In some instances the device migrated after being improperly placed, resulting in a very complicated and often unsuccessful retrieval intervention which may require multiple surgeries.

In 2013, a study published in the Journal of the American Medical Association (JAMA) examined a total of 952 patients who were implanted with IVC filters. 74 patients (7.8%) suffered thrombotic events such as pulmonary emboli, even when the device was in place.

In many instances, patients who used this surgical implement were inconsistently treated with anticoagulant drugs, further increasing their risk of blood clots. Also, in almost one-fifth of them the surgeons weren’t able to successfully remove the implant.

The researchers then concluded that the device’s effectiveness was “suboptimal” since it was associated with an unsettlingly high rate of thromboembolic accidents. 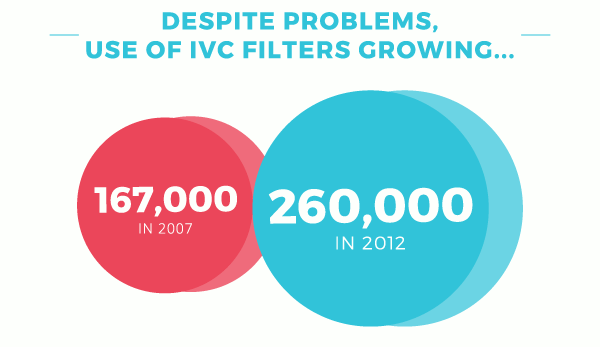 But the use of IVC filters kept growing during the last decades, from 167,000 in 2007 to almost 260,000 in 2012. These devices have, in fact, been in use consistently since their initial approval through the infamous FDA’s 501K clearance protocol despite the lack of adequate human or animal data to prove their safety or effectiveness.

The Lehmann Report and the forged signature

In a desperate attempt to prove their device’s safety, in 2004 C.R. Bard hired a consultant, Dr. John Lehmann. However, after the reviewing all the evidence in his independent study, the physician acknowledged the device’s exceptional dangerousness when compared to similar products.

The manufacturer then ignored his warning, and instead of warranting further research, they decided to bury the report. An NBC news reporter discovered the fraud (which was promptly called the “Lehmann report”) as the company was required by federal laws to disclose the results of the investigation.

In 2005, a company regulatory specialist devised the filter’s grave risk of malfunction and highlighted how poorly designed it was. He then refused to sign off an FDA application, but a Bard’s executive decided to forge his signature in order to submit it to approval regardless of the health consequences.

Instead of recalling a dangerous device, which so far has been linked with 27 deaths and many more complications, the company decided to keep it on the market for five more years, selling over 160,000 of them.