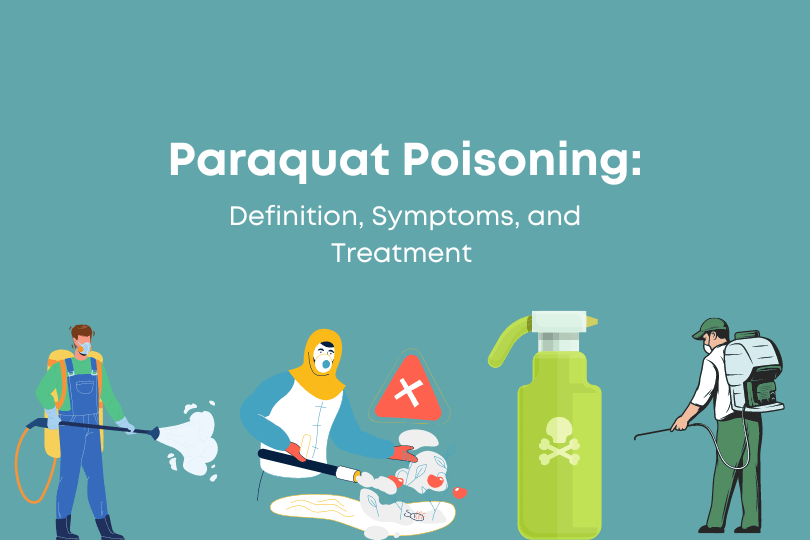 Paraquat poisoning is a leading public health problem in several developing countries such as those in Asia, Pacific nations, and the Americas. Due to its accessibility and affordability, many people from said countries use paraquat to commit suicide.

Because ingestion is the route of exposure that is most likely to result in poisoning, the most immediate signs of paraquat poisoning include pain and swelling in the mouth and throat, tongue sores, stomach pain, vomiting, and bloody diarrhea.

Treatment for poisoning involving the use of paraquat initially consists of removing the toxic chemical out of your system and preventing further absorption with the help of activated charcoal or Fuller’s earth.

However, even if someone survives poisoning by paraquat, it is highly likely that they will suffer from its permanent consequences, including Parkinson’s disease.

Countless farmers and agricultural workers who regularly worked with paraquat are now filing a paraquat poisoning lawsuit after they developed Parkinson’s disease and were able to identify what caused them to develop the disorder – the toxic herbicide they have handled for years.

What is Paraquat poisoning?

Paraquat poisoning is a form of fatal poisoning that results from the inhalation, ingestion, or skin absorption of the toxic weed killer paraquat. And although ingestion most frequently results in poisoning, other routes of exposure can also be fatal.

One of the more commonly known immediate symptoms of paraquat poisoning through ingestion is the paraquat tongue, which is characterized by ulcers and burning sensation on the tongue. 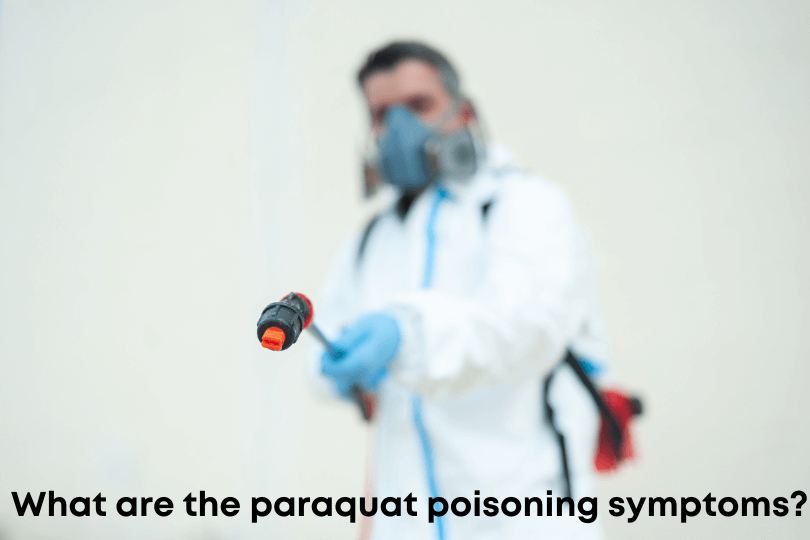 What are the paraquat poisoning symptoms?

The signs of paraquat toxicity to humans may vary from mild to severe and acute to chronic. The most important paraquat poisoning symptoms are listed below.

What are Paraquat side effects?

Paraquat is known to cause adverse effects on several organs of the body. The most common paraquat side effects are listed below. 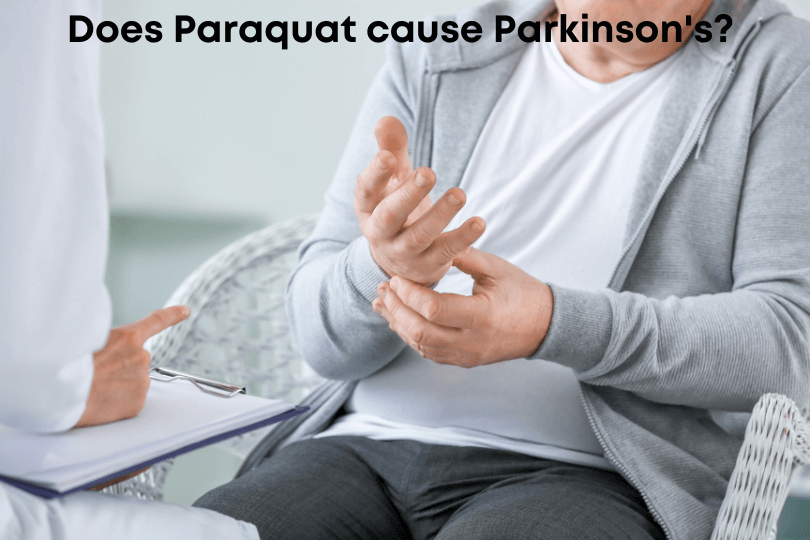 Does Paraquat cause Parkinson’s?

Yes, paraquat may cause Parkinson’s disease and a growing body of research shows the link between the two. Long-term exposure to paraquat has long been associated with an increased risk of Parkinson’s disease, especially in farmers and other agricultural workers who often handle the chemical at their workplace.

In fact, the first paraquat lawsuit was filed in 2017 by farmers and agricultural laborers who used paraquat on farms and later developed Parkinson’s disease.

Evidence exists that paraquat neurotoxicity occurs due to a mechanism called oxidative stress, which destroys the cells of the nervous system in a way that closely resembles how nerve cells lose function in Parkinson’s disease.

Does Paraquat cause cancer?

No, paraquat does not cause cancer, as there is little evidence to suggest that paraquat is a cancer-causing agent. However, previous studies have suggested a potential relationship with some forms of cancer, including non-Hodgkin’s lymphoma (NHL).

And while the evidence linking NHL to paraquat herbicide exposure may be lacking, plenty of studies have shown an association between a similar herbicide and NHL.

The chemical in question is Roundup, the world’s most widely used herbicide. Animal and human population studies have both found a link between Roundup exposure and non-Hodgkin’s lymphoma.

What’s more is that in 2015, the World Health Organization’s International Agency for Research on Cancer classified glyphosate, the active ingredient in Roundup, as a probable human carcinogen.

Does Paraquat cause ALS?

Recent research has shown that there appears to be an increased risk of ALS associated with paraquat exposure. Despite decades of research, experts have not unearthed any genetic link to ALS, but they have always suspected pesticide exposure to be a key factor in the development of the disease.

Aside from paraquat, other pesticides such as chlorpyrifos, glyphosate, and permethrin have also been linked by recent studies to the fatal disease.

Can Paraquat cause essential tremors?

Although both neurological disorders affect movement and tend to get worse over time, they have key differences. For instance, essential tremors are felt more when in motion, while tremors in PD are felt more when the affected body parts are resting.

Unfortunately, because the symptoms of the two diseases tend to overlap, someone who has a history of paraquat exposure may be misdiagnosed as having essential tremors. This is where the importance of seeking a second or even a third opinion comes in – oftentimes, when paraquat exposure victims receive a diagnosis, they have no way of knowing anymore that it was the toxic chemical that caused them to develop Parkinson’s disease.

Can Paraquat cause Lewy body dementia?

No, paraquat cannot cause Lewy body dementia (LBD), which is a type of progressive dementia that occurs due to the formation of clumps of proteins called Lewy bodies in the brain.

LBD can lead to problems with thinking, reasoning, behavior, and independent function. While there are known toxic causes of dementia, including exposure to heavy metals, carbon monoxide, solvents, and other pesticides, paraquat is not one of them. 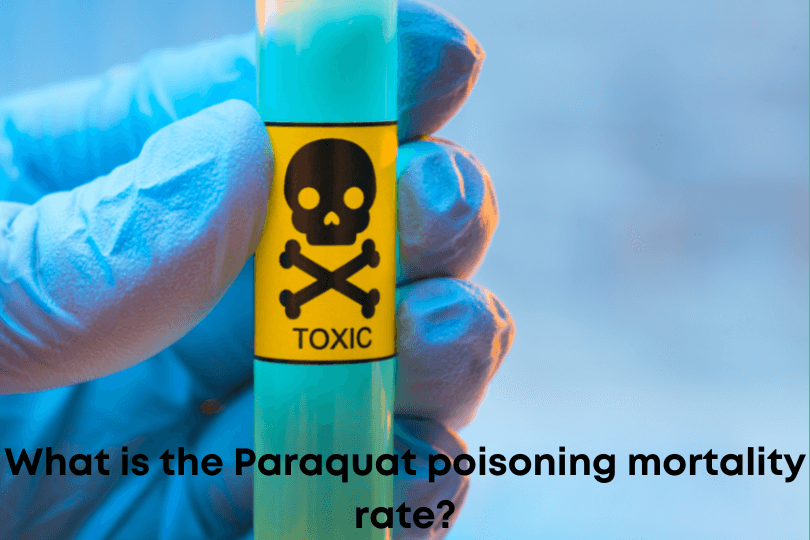 What is the Paraquat poisoning mortality rate?

The paraquat poisoning mortality rate statistics indicates that fatality is still very high, and can vary between 50% and 90%, despite large variations in treatment today. However, in cases of intentional self-poisoning using concentrated formulations, mortality rate approaches up to 100%.

A fatal dose of paraquat is around 30 mg/kg, which is about 7-8 mL of the 24.6% solution sold commercially.

What is the paraquat poisoning treatment?

The different options for paraquat poisoning treatment include removing the poison from the body with the use of Fuller’s earth or activated charcoal, as well as treating other symptoms with N-acetylcysteine (NAC) and sometimes medications.

Fuller’s earth is a gut absorbent that is often used to treat poisoning by paraquat and other toxins. Oral administration of Fuller’s earth has proven to be effective in preventing the toxic actions of ingested paraquat.

On the other hand, another common treatment used for paraquat poisoning is activated charcoal. It can also be taken by mouth to trap various types of chemicals to stop poisoning. Liver damage is also frequently reported after exposure to paraquat. In such cases, N-acetylcysteine (NAC) may be used for the detoxification of the liver, which could help prevent more severe side effects of paraquat.

Lastly, medications and other medical interventions may also be used to improve breathing and raise blood pressure in paraquat poisoning patients.

Can Paraquat poisoning be cured?

No, paraquat poisoning cannot be cured. Most of the time, the damages and long-term consequences of paraquat intoxication are not reversible. In some cases where the victim has survived, permanent side effects are highly likely.

What to do if you’ve been exposed to paraquat?

Immediate medical attention is the key to preventing the severe side effects of paraquat. However, there are also things you can do to lessen the impacts of the chemical on your body. Listed below are the things you should do if you’ve been exposed to paraquat.

What is paraquat poisoning antidote?

There is no paraquat poisoning antidote to date, despite the medical and technological advancements available to us at the present time. There is no proven cure that exists for poisoning by paraquat. As the Environmental Protection Agency put it, “Only one sip can kill” and there is no antidote to save you.