Home / News / How long does Taxotere stay in your system?

How long does Taxotere stay in your system? 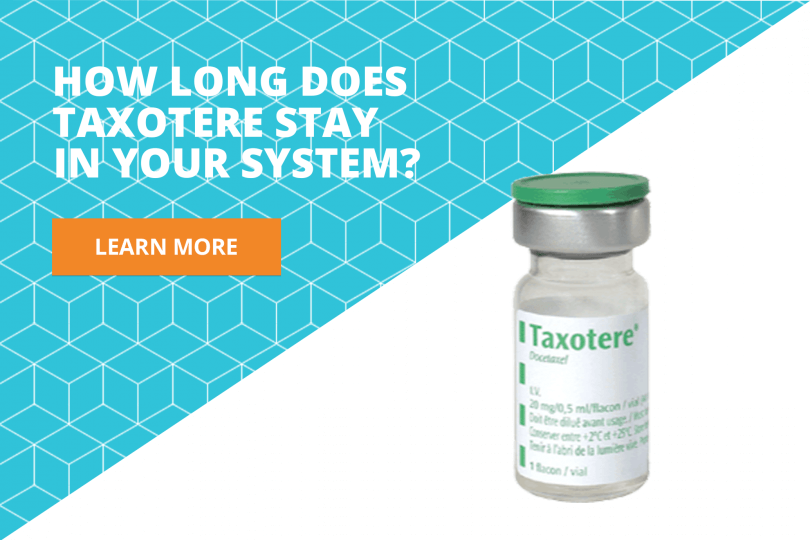 It is vital (literally) to know how long does Taxotere stay in the system of a cancer patient at all times to keep its toxicity under control.

Fighting against cancer is an uphill battle. As if the condition itself wasn’t enough already, even the drugs administered to give patients a chance to survive come with a plethora of burdensome side effects.

Taxotere (docetaxel) is a potent chemotherapy agent from the taxane class that acts by disrupting cellular division.

This drug is used to treat many aggressive or advanced malignancies such as prostate cancer, head and neck cancer, breast cancer, and lung cancer.

It interferes with many natural functions of our body, such as by damaging the immune system, blood cells, and hair follicles.

Common side effects such as hair loss, nausea, fatigue, peripheral neuropathy, and fluid retention can be coupled with potentially lethal ones such as severe anemia, neutropenia, thrombocytopenia, and leukopenia if Taxotere levels become too high.

As a result, class action lawsuits have been filed against the manufacturer Sanofi.

This drug requires many days to be expunged from your body since its so-called “elimination half-life” is 86 hours.

In other words, your body requires three days and a half on average to get rid of 50% of this substance. As a consequence, Taxotere stays in your body for a whole week after infusion, and that’s why it is usually provided in one-week or three-week cycles.

A highly toxic substance, the blood levels of Taxotere must be constantly monitored to avoid the patient from facing much more serious damage.

The pharmacokinetics of this chemotherapy agent is, in fact, extremely complex. Docetaxel must be administered intravenously very slowly, over the course of a one-hour long infusion.

Your liver is responsible for metabolizing the drug, but if for any reason this organ doesn’t work as it was supposed to be (such as in the case of liver failure), the detoxification process may require more time.

Therefore, frequent plasma samplings must be taken after every cycle to check if the drug’s levels are still high even after a week is passed.