Over 3 million U.S. Veterans are receiving compensation for hearing problems 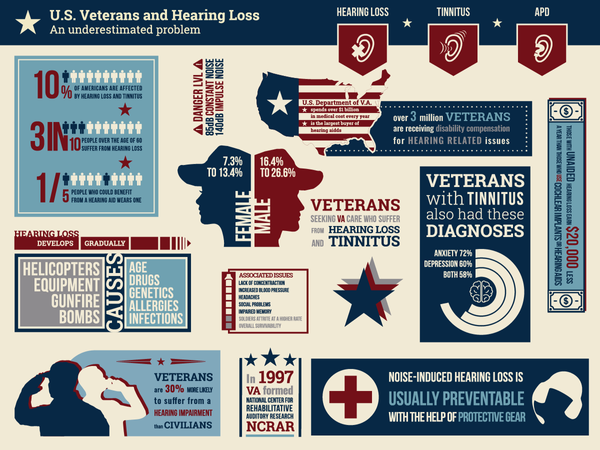 Nearly 30 million Americans (10% of the population) are affected by hearing loss and tinnitus – two conditions whose severity ranges from mildly annoying to seriously impairing.

For the most part, these conditions affect individuals who are over age 65, yet they are the most common service-connected disabilities among U.S. veterans. Over 3 million veterans are either receiving disability compensation for hearing loss and tinnitus or are in treatment for hearing issues.

The U.S. Department of Veterans Affairs (VA) bears the burden of this problem, spending over $1 billion in medical costs every year to provide military retirees with all the necessary care. Let’s dive deeper into this complex topic to understand the social and personal consequences of hearing loss in U.S. soldiers.

Together with tinnitus, hearing loss usually develops gradually. Usually, patients start having difficulties understanding other people when they talk too quickly, can’t hear what television says, or keep turning the volume higher and higher without even realizing it.

Tinnitus, instead, usually manifests as the sensation of hearing a continuous or intermittent sound such as a buzzing, whistling, or ringing. When this noise is particularly loud, such as during the night, it may become particularly stressful and cause sleep disorders, lack of concentration, and anxiety.

Hearing loss is usually caused by natural aging, with 3 in 10 people over age 60 dealing with it. It is also associated with allergies, drugs, or infections. One of the most common causes of tinnitus and hearing impairment is the exposure to sudden, repeated, or very loud sounds which may damage the inner ear and auditory nerve.

Exposure to a constant noise of approximately 85 dBA for 8 hours per day for a 40-hour work week, or impulse noise with peak levels exceeding approximately 140 dB SPL are both hazardous.

For example, nearly 50% of plumbers and carpenters report some form of hearing reduction. Although hearing loss and tinnitus cannot be treated (hearing can’t be restored to normal), people who suffer from some form of impairment may benefit from using a hearing aid – a small device that is worn inside or behind the ears to increase the volume of sounds. However, only 1 out of 5 people who could benefit from a hearing aid actually wears one.

Soldiers are frequently exposed to loud sounds, such as military equipment noise, bombs, gunfire, and helicopters. It’s easy to understand why many of them eventually suffer from some form of hearing impairment.

Sound during shooting exercises alone can reach peak noise levels of 180 dB – 40 dB higher than the safety level. For example, 71% of soldiers deployed in the Iraq and Afghanistan operations reported exposure to loud noise, and more than 15% of returnees reported ringing in their ears.

On top of that, soldiers who are exposed to blasts eventually develop a disorder known as “auditory processing disorder” that causes them to have trouble understanding speech even when they obtain normal scores on hearing tests.

Noise-induced hearing loss is usually preventable by using military-grade earplugs, earmuffs, or noise-attenuating helmets. Some of them, however, didn’t work as they were supposed to, and many soldiers suffered the consequences.

One of the companies that manufactured the allegedly defective devices, 3M, already paid a $9.1 million settlement to the U.S. Department of Justice to resolve allegations that it sold flawed earplugs to the Defense Logistics Agency.

Hearing loss and tinnitus alone are the most common individual disabilities in the veteran population, with more than 1.16 million former American soldiers receiving disability compensation for hearing loss, and another 1.79 million for tinnitus in 2017. 16.4% to 26.6% of male veterans seeking VA care suffer from serious hearing loss and tinnitus. These percentages are almost halved in female veterans (7.3% to 13.4%).

Retired soldiers are, on average, 30% more likely to suffer from severe hearing impairment than civilians, showing how serious this problem is. The VA is the largest buyer of hearing aids in the U.S., buying one in five devices at an average of $348.15 each.

The consequences of hearing impairment

Even if it’s not a life-threatening condition, hearing impairment may have many negative effects on the quality of life of those affected.  Those with unaided hearing loss earn every year, on average, $20,000 less than those who use cochlear implants or hearing aids.

Especially when they are not treated, hearing issues may cause isolation, withdrawal, and communication problems. Hearing loss is associated with many issues which may affect the personal lives of those affected, ranging from simple lack of concentration to higher risk of mental illnesses and problems in maintaining social relationships.

According to a study published in 2015, 60% of Veterans with tinnitus also had a diagnosis of depression, 72% had anxiety, and 58% suffered from both conditions.

Hearing loss is also a significant health and readiness issue for active duty personnel since afflicted soldiers attrite at a higher rate from military service than those with normal hearing.

The reduced hearing may also have a negative impact on fighters’ survivability since hearing is necessary to locate patrol members, localize enemies, spot hidden movements through leaves, twigs, or grass, and the type of rounds fired.