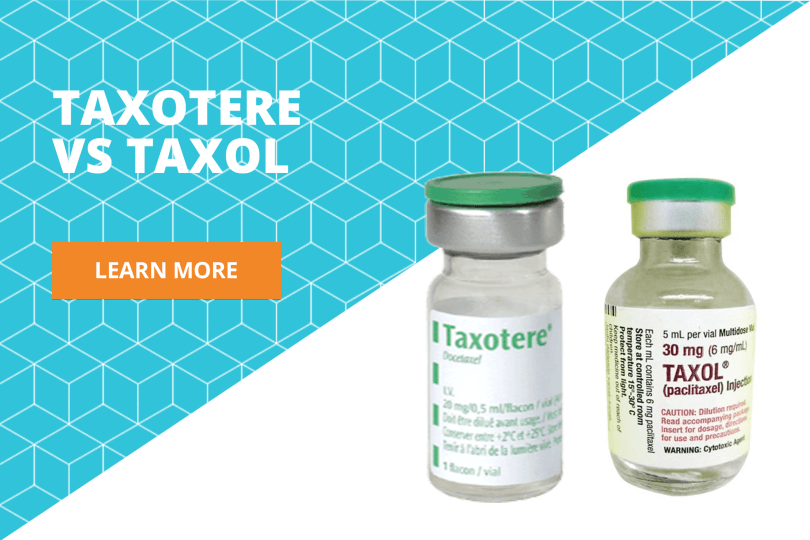 Taxotere (docetaxel) vs. Taxol (paclitaxel) – Why patients should use a less safe drug?

When the manufacturer started marketing Taxotere (docetaxel), it widely marketed it as more potent and effective than its older counterpart Taxol (paclitaxel). However, the newer chemotherapy agent was later found to be significantly more dangerous and linked to a higher number of side effects. Paclitaxel can be used at lower doses with similar effects, leading to less severe adverse reactions, and it’s also much cheaper than the more modern medication. Newer studies that compared the safety and effectiveness of the two taxanes found that Taxotere isn’t better than Bristol-Myers Squibb’s older medication, but it was, in fact, more dangerous.

Despite this, in the last decade, paclitaxel had the rug swept off its feet by its competitor, which, in the meanwhile, had become the mainstream cancer treatment even if its price is several times higher.

How do Docetaxel and Paclitaxel work?

Docetaxel and Paclitaxel are two chemotherapy agents of the taxanes group, used as a last resort therapy to treat those cancers that failed to respond to other, less toxic therapies. They are indicated during the treatment of several late-stage tumors including breast, gastric, prostate, and non-small cell lung cancer (NSCLC).

Taxanes are anti-mitotic agents, meaning that they suppress the replication of cells inside the body by targeting tubulin, a protein that constitutes the cellular cytoskeleton. Without this protein, the cells quickly die. In theory, these drugs should preferably disrupt tumor cells over healthy ones due to their higher replication speed. However, all those cellular populations characterized by a high duplication rate such as those found in the immune system, blood and hair follicle, are damaged as well. Because of this unavoidable side effect, both paclitaxel and docetaxel are highly toxic substances associated with many adverse reactions such as hair loss, recurrent infections, and chronic fatigue, albeit to a different extent.

Taxotere or Taxol – Which one is better?

The inherent toxicity of the taxanes is associated with a high number of side effects, meaning that the blood levels of these drugs should be closely monitored to prevent more serious (or even lethal) consequences. Taxotere is a much more potent drug than Taxol, meaning that the same effect can be achieved with lower a dose. Even if this may seem like a positive aspect of the newer agent, docetaxel is still associated with significant toxicity and a higher risk of developing drug resistance, which forces doctors to increase the dosage progressively.

Another apparent advantage of docetaxel over paclitaxel is that the former can be administered less frequently: The one-hour-long intravenous infusion cycle can be administered on a monthly rather than weekly basis. Since each cycle requires a trip to the oncology clinic and a certain amount of side effects, patients initially saw Taxotere as a more convenient alternative. However, every paclitaxel cycle has a cost which is 20 times cheaper than docetaxel, meaning that the latter can be so expensive that some oncology wards spend up to 90% of their yearly taxanes expenditure on it.

The alleged superior effectiveness of docetaxel also comes from a range of statistically unreliable assumptions. Back in 2009, the NICE guidelines indicated the
doxorubicin and cyclophosphamide (AC) protocol as more effective if co-administered with a taxane. The experts ultimately recommended the docetaxel regimen (DAC) to be used in association with the AC protocol, simply because the paclitaxel regimen (AC-P) was used so infrequently that they had no data to draw a definitive conclusion. Other studies such as the one published in the New England Journal of Medicine, instead, found that the AC-P regimen was indeed superior to the DAC one since it was associated with increased survival rates.

Taxol was manufactured by Bristol-Myers Squibb and has been one of the most successful drugs in the fight against breast cancer since it originally hit the market in 1992. However, Sanofi-Aventis decided to ignore the evidence showed by the clinical trials and kept started marketing Taxotere as a superior alternative to paclitaxel.

A group of researchers published an important study in the journal Cancer Treatment Reviews which found that from 2004 to 2008 the prescriptions of paclitaxel plummeted by -50%. It can’t be a coincidence that 2004 was the year when Taxol’s patent expired and that during those four years the prescriptions of Taxotere increased by +50% – the same exact amount. Two years later, in 2010, docetaxel became one of the most used cancer medications in the world, reaching over $1.2 billion in sales in the U.S. only.

In April 2009, the U.S. Food and Drugs Administration (FDA) sent a warning letter to Sanofi, accusing the manufacturer of fraudulently distributing misleading promotional material about Taxotere. The company kept, in fact, claiming that its drug was better, safer and more effective than Bristol-Myers Squibb’s one, although no evidence was available to support these claims. The regulatory agency noted that no one of the studies cited by the pharmaceutical company has ever been able to provide statistically significant proof that docetaxel is in any way superior to paclitaxel. Sanofi voluntarily failed to disclose to the public how dangerous its chemotherapy agent was, setting the ground for an unstoppable wave of lawsuits filed by injured patients.