After receiving over 60 reports of adverse events regarding metal toxicity by the Food and Drug Administration, the FDA chose to recall these hip replacement devices. In July 2012, all global production and sale of these devices were ceased.

Due to the placement of these hip implants, being driven deep into a patient’s femur, this revision surgery is very difficult for the surgeon, and traumatic for the patient. In fact, there is a risk of fracturing the femur during surgery, which causes its own set of issues, and has brought the Stryker hip recall lawsuits to the forefront of court cases. 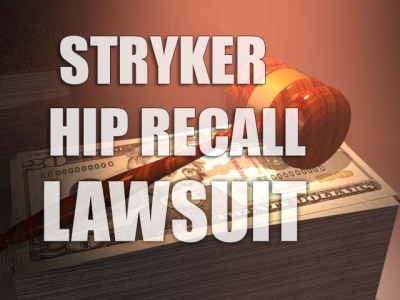 Medical device manufacturers are responsible, both ethically and legally, for designing their products to be safe and effective. Additionally, they are obligated to warn patients about any products that are deemed unsafe in enough time to prevent harm and/or failure of the devices. When these manufacturers do not take these responsibilities, the victims can sue them for compensation; in this case, it’s in the form of a Stryker hip recall lawsuit.

The amounts of compensation received can cover the costs of both past and future medical treatments, additional surgeries, and even loss of livelihood or wages.

Every Stryker hip recall lawsuit accuses the company of negligence because neither of the hip implant systems was tested before they were released to the market. Additionally, the claim is that the company did not warn physicians or patients about the possible side effects, including excessive ions in the tissues and blood around the implant. Stryker has stated that these recalls and the lawsuits could cost them around $1.3 billion. December 2013 brought about the first four Stryker hip recall lawsuit settlements, but the amounts were undisclosed.

If you or a loved one has had either of these hip replacement implants, get in touch with a product liability attorney. They will be able to review your case, let you know what your options are, and advise you as to whether or not you should file a Stryker hip recall lawsuit. In most cases, they will review your case for free– and you are not required to pay for representation unless you win your case.

Do you have a Stryker Hip implant?

Did you know that in 2012, the Stryker Corp marketed 57,000 products across the world and had over $8 billion in annual sales? However, it was found that two of its hip implants, the Rejuvenate and the ABG II Modular-Neck Hip Stems caused complications. Due to these complications, these two models were recalled in 2012. This resulted in a number of Stryker Hip Recall Lawsuits.

Along with the Rejuvenate and the ABG II Modular-Neck hip implants, they also recalled the Accolade TMZF Plus Hip Stem in 2009, 2011, and 2013 due to manufacturing and packaging errors. The Accolade, like the ABG II and Rejuvenate, is made of the titanium alloy called TMZF. This hip stem has a PureFix HA coating that is designed to help the one to grow around the implant, ensuring a better fit.

The Rejuvenate and the ABG II were released in 2009, and then recalled in 2012 after thousands of patients who had this hip implant began complaining. Because of this, there have been a number of people looking to file a Stryker hip recall lawsuit.

These Stryker Corp. hip implants are different than the typical implants that only have a one-piece neck and stem, referred to as a monoblock design. These three hip implants actually have several neck and stem components, which are modular and interchangeable. They were designed to allow the surgeons to have more flexibility because it offers them anatomically correct components so that they can be custom fitted to patients.

The ABG II has eight left stems, eight right stems, and ten modular necks. This offers much greater stability and less stress on the bones. The Rejuvenate hip implant has six stems and sixteen necks. It was marketed to the younger patients and promised longer lasting devices with a better range of motion.

The stems of these implants are made with the proprietary titanium alloy of Stryker that combines titanium, molybdenum, zirconium, and iron. The company’s claim is that this blend will resist the effects of fretting and corrosion. Fretting is when small particles of the metal flake off of the implant and into the body. Stryker claims that this alloy is 20 percent stronger than other alloys and is much more like bone.

However, post-market data showed that after these devices were implanted that there was evidence of fretting and corrosion. This caused Stryker Corp to recall both of these systems and to deal with many a lawsuit as a result. Sadly, this recall was too late for some patients. There are some serious side effects connected with these implants including release of toxic metals and loosening of the implants. These complications have led to many Stryker hip lawsuits being filed.

In June 2008, the Rejuvenate hip implant was approved by the FDA. The ABG II was granted approval by the FDA in November 2009. The question now is, why did it take so long for the company to discover the defects and dangers of these devices? At least part of the reasons can be found in the approval process of the Food and Drug Administration for medical devices.

Both of these hip implant systems were submitted through the 510 (k) Premarket Notification Process of the Food and Drug Administration. Under this program, drugs and/or medical devices are allowed to be released to the public without being put under clinical trials- as long as it can prove that it is very similar to a product that has already received approval. Since both of these hip implant systems were very similar to other technologies that had already been approved, they were able to get them on the market quickly.

Since they were able to get the approval, they were only required to conduct post-market surveillance, not pre-market testing. Basically, with the 510 (k) program, companies are not required to prove safety in advance. This means that any problems with devices in this program can only be found after they have been used in patients. Even worse, these devices were modeled after devices that were already suspected of having pretty serious problems already- issues which led to adverse tissue responses and even bone fractures.

The recent hip implant recalls have focused on the metal-on-metal components, which can release metallic debris into the body through normal wear and tear. However, the two modular-neck hip implants from Stryker are not exactly metal-on-metal, since there is not a metal ball rubbing against a metal socket.

On the other hand, since the Stryker necks are comprised of cobalt and chromium, and the stems are titanium-coated, they technically do have a metal-on-metal junction. This means that they actually can cause some of the same complications as the other defective implants.

An “urgent safety alert” was issued in April 2012 by Stryker Corp in order to warn surgeons and hospital risk departments for these two hip replacement devices. The alert gave a list of the potential dangers of these devices, including: excessive metal debris or ion generation due to fretting or corrosion around the modular neck junction. This could lead to an increase in metal ion generation in the surrounding joint space.

For several years now, researchers in the medical field have had questions regarding the safety of these devices due to the tendency for metal components to rub against each other, which results in minute shards of metal being deposited into a patient’s bones, bloodstream, or tissues.