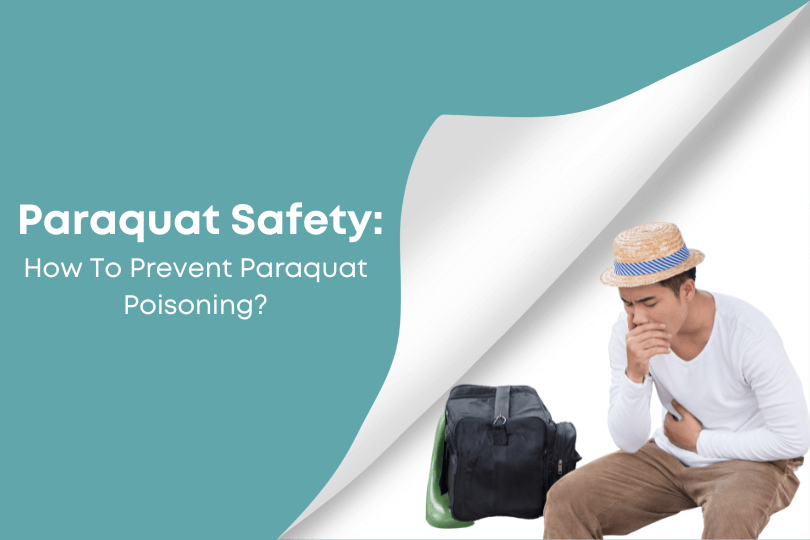 Plaintiffs who have suffered from the long-term effects of paraquat poisoning have been filing a paraquat poisoning lawsuit in different courts across the United States. And the numbers of cases filed in the paraquat multidistrict litigation continue to increase as we speak.

Despite the advancements in medical technology today, there is still no cure available for paraquat poisoning. In other words, there are no widely accepted guidelines on the treatment of patients with paraquat intoxication. But this is where the phrase “prevention is better than cure” comes in handy.

You see, even though poisoning by paraquat is very hard to treat and oftentimes fatal, the key to preventing it is by thoroughly reading and understanding the product label before using paraquat.

Labels serve an extremely important role in the safety of users, as they are legal documents that provide detailed information on how to use any agricultural chemical products correctly and legally.

How to recognize Paraquat?

Paraquat in its purest form is a white, crystalline, odorless powder that has a yellowish appearance. However, being highly toxic, herbicides are not sold in pure forms or technical grades, as these are only used in analytical and toxicological studies.

Paraquat is manufactured in various formulations by adding different additives, such as dusts, granules, and powders, to name a few. Because of its extreme toxicity, the form of paraquat marketed in the United States is dyed blue as a form of a security feature that is meant to help users recognize what is paraquat, keeping the weed killer from being confused or mixed with other beverages.

What is Paraquat color?

Paraquat manufacturer Syngenta injected a blue dye to paraquat starting in 1988 to prevent accidental ingestions and to discourage the use of the chemical by suicide victims. This distinctive blue dye is also a form of security measure so users will not mistake paraquat for other beverages. This way, the transfer of the weed killer to other containers can be avoided and there are lesser chances that a potential victim may later mistake it for a drink.

What is Paraquat smell?

Paraquat that is sold in the United States has a pungent smell and its sharp, strong odor serves as a warning to users that they are handling a toxic chemical. Other paraquat products sold outside the country may not come with these added security features.

What is Paraquat taste?

Paraquat has an unpleasant, disgusting taste that comes from its chemical additives. Although it is originally odorless, the stanching agent or emetic added to paraquat contributed to its unpleasant taste.

This is why it was initially believed that it is generally difficult to kill a person through oral administration of the weed killer due to its disgusting taste. However, paraquat remains to be a common agent for deliberate self-poisoning, especially in developing countries where it is cheap and easily accessible. 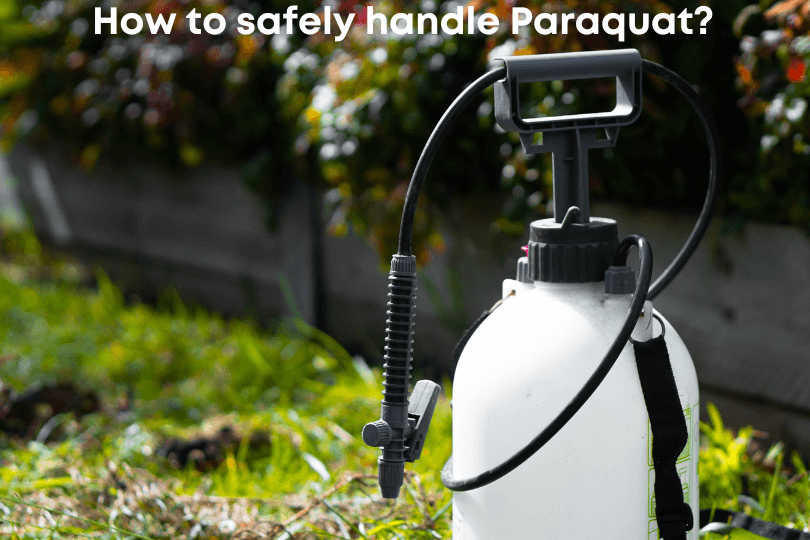 How to safely handle Paraquat?

Paraquat use has been more widespread since the emergence of glyphosate-resistant crops. That said, now more than ever, it is important to be well-informed about the proper handling of the herbicide. The ways on how to safely handle paraquat are listed below.

Paraquat is classified as a restricted use pesticide (RUP), which means it is only available for purchase and use by certified applicators who underwent an extensive paraquat training program approved by the Environmental Protection Agency (EPA). This paraquat-specific training emphasizes in detail how to handle paraquat safely from storage to mixing, application, and disposal.

Paraquat is injected with a blue dye and given a strong smell to prevent the chemical from being mistaken for other beverages. However, a 2009 data analysis suggests that more than 80% of all identified fatalities from paraquat products was due to the transfer of the chemical into a beverage container. Some of the cases were intentional while many others were due to the accidental ingestion of paraquat. It is also unsafe to reuse a herbicide container for any purpose.

3. Keep away from unauthorized persons

In 2019, the new paraquat labeling included a mitigation measure that prohibited unlicensed individuals from using paraquat even when under the supervision of certified pesticide applicators. It can now only be handled by certified applicators who underwent the EPA-approved paraquat specialized training.

4. Never use or store in residential dwellings

Because it is a restricted use pesticide, paraquat cannot be purchased by homeowners who might apply the toxic herbicide in their lawns and put nearby residential areas in danger. Additionally, due to its toxicity, paraquat cannot also be stored in or around residential dwellings. However, recent evidence suggests that paraquat exposure within 550 yards of a home may increase the risk of Parkinson’s disease by as much as 75%. This means that even individuals living near farming communities where paraquat is sprayed can fall victim to the adverse effects of the chemical.

5. Never use at home or in community areas

Paraquat use is prohibited around home gardens, parks, schools, golf courses, or playgrounds to prevent severe injury and even death that could result from paraquat ingestion. The link between paraquat and Parkinson’s disease has been the topic of various studies for decades, and considering that these areas in the community are frequented by people of all ages, they should be safe from any harm that could arise from the use of paraquat products.

Pesticide labels do not only inform people about the hazardous effects of a chemical or about first aid tips. In fact, they are legal documents that give instructions on how to use a pesticide safely and legally. Paraquat use is considered to be safe when instructions on the label are strictly followed. Despite that, however, paraquat is the leading agent for pesticide-related intentional or unintentional poisonings in countries where its use is still allowed, prompting environmental organizations and advocacy groups to push for a paraquat ban.

One of the chemical handling instructions for paraquat requires those who work with it to wear personal protective equipment (PPE), which include long-sleeved shirts, long pants, chemical-resistant gloves and apron, face shield, protective eyewear, shoes plus socks, and a respirator. Wearing these can reduce the risk of skin absorption, inhalation, or ingestion of paraquat for individuals who work closely with the weed killer.

Yes, paraquat leaves residue that may be left on plants and crops sprayed with the chemical. In fact, evidence exists that paraquat residues have been found to be mainly present in products intended for animal feed. This suggests that paraquat and animals are a bad combination because concentration levels of the herbicide that are above permitted tolerances can be a significant route to a prolonged exposure of animals to paraquat.

Yes, paraquat affects soil and its toxicity to terrestrial environments have long been raising serious concerns. In countries where it is extensively used to control weeds, paraquat can leave residues in soil surface, which is harmful to ecology and can also make its way to the food chain.

Moreover, studies indicate that microorganisms could only completely degrade paraquat present in soil in six years. This prolonged half-life can cause serious damage not only on humans but also on other mammals. 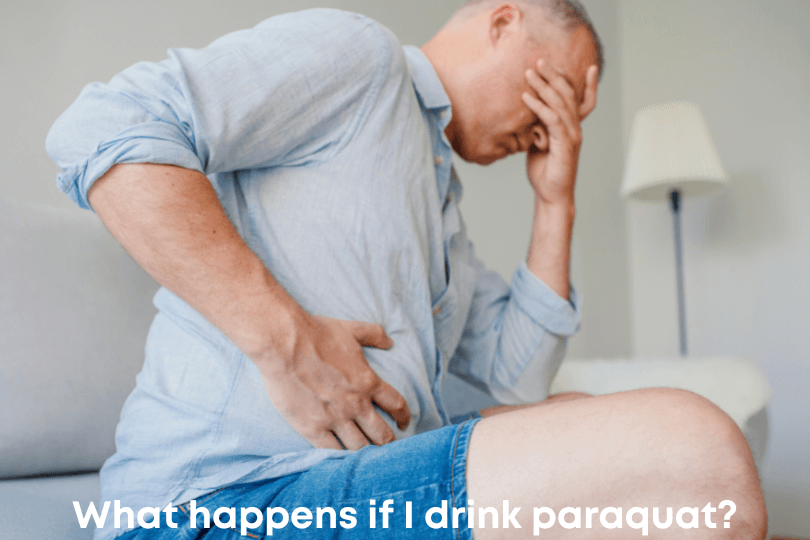 What happens if I drink paraquat?

If you drink paraquat, you may experience immediate symptoms of illness, including pain and swelling of the mouth and throat, and other gastrointestinal symptoms, such as stomach pain, nausea, vomiting, and bloody diarrhea.

Following ingestion, paraquat is quickly absorbed into the body and causes widespread toxic chemical reactions that leads to the damage and eventual death of cells. The target organ for paraquat poisoning is the lungs, where concentrations of the weed killer tends to be the highest after intoxication.

How do you know you’ve been exposed to Paraquat?

Initial signs that you’ve been exposed to paraquat may depend upon the route of exposure. For instance, early symptoms of poisoning by paraquat ingestion are burning pain in the mouth, throat, and chest, abdominal pain, and bloody diarrhea.

On the other hand, immediate signs of paraquat exposure through skin absorption include skin irritation, dry and fissured hands, burns, and blistering. In severe cases, prolonged contact with skin may even lead to the loss of fingernails.

Lastly, inhalational exposure to paraquat can immediately cause respiratory symptoms, such as breathing difficulties, and lung irritation, but can quickly progress to lung damage and pulmonary fibrosis, which is the leading cause of death in paraquat poisoning.