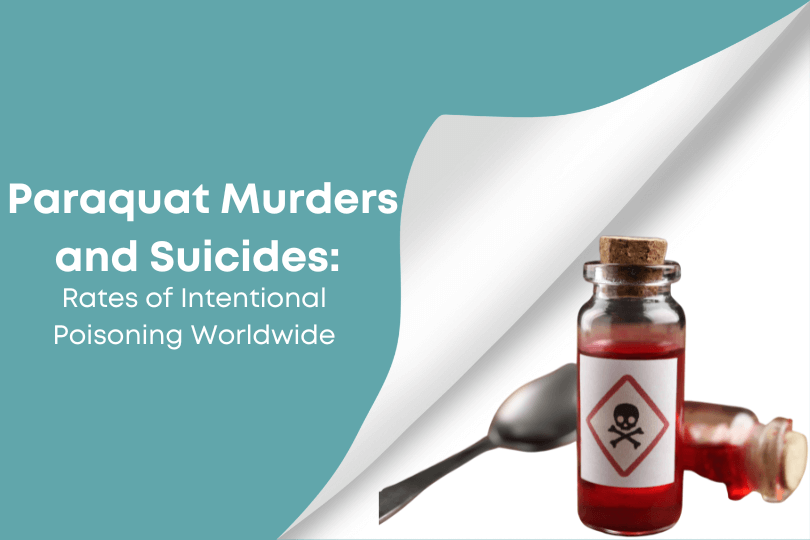 The association between the herbicide paraquat and various long-term health problems, including, among others, severe dermatitis, respiratory failure, and Parkinson’s disease, has been a long-standing concern for advocacy groups and environmental organizations worldwide.

In fact, the link between paraquat and Parkinson’s disease is the main reason why thousands of plaintiff lawsuits have already been filed in the paraquat lawsuit 2022. Victims allege that had main paraquat producer Syngenta AG warned them about the potential risk of Parkinson’s disease with paraquat exposure, they’d have known about this danger beforehand and therefore could have avoided living with the neurodegenerative disease.

However, paraquat is not only notorious for causing long-term health effects among its users. It has also raised concerns worldwide because of its use as a major suicide agent, especially in developing countries where it is easily accessible and relatively cheap.

Read on to learn more about the use of paraquat in suicide and murder in different countries.

Is Paraquat Used in Suicide Attempts?

Yes, paraquat is commonly used in suicide attempts around the world. In fact, it has been described as the most common poisoning agent in various studies conducted in different countries where it has played a key role in suicide cases.

And although other available agrochemicals in each country have also been implicated in intentional and unintentional poisoning cases, paraquat was consistently the most common suicide agent used in the majority of those cases. 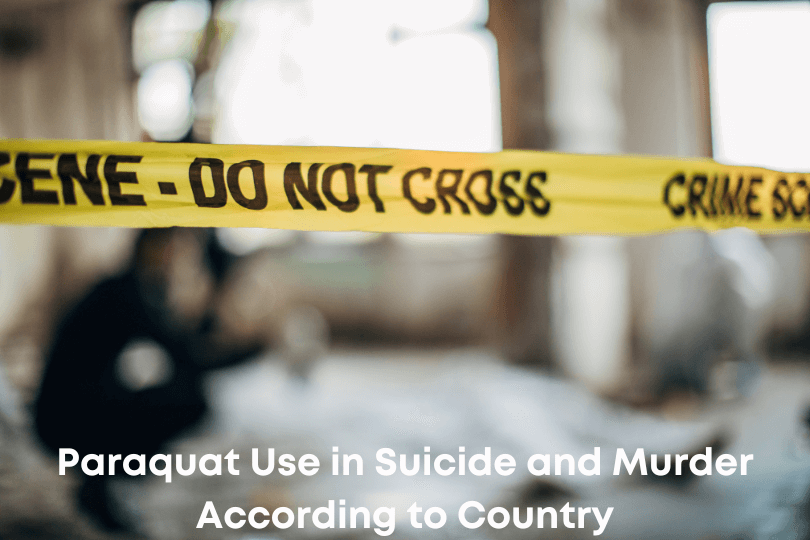 Paraquat Use in Suicide and Murder According to Country

Each year, intentional pesticide poisoning results in several hundred thousands of deaths worldwide. But what’s alarming is that among many agricultural chemicals used as suicide agents, paraquat remains to be the most common tool for self-poisoning. Paraquat use in suicide in murder in different countries is discussed below.

However, after a first-stage ban on the import and production of paraquat was implemented in early 2018, followed by a complete, second-stage ban on paraquat sale and use in 2020, a significant reduction in pesticide suicide rates was observed.

According to the study, the number of pesticide suicides decreased by 37% during the first complete year after the paraquat ban. Furthermore, this reduction in self-poisoning by paraquat also contributed to Taiwan’s overall decrease in all-method suicide rates among older people. The elderly, or those aged 65 and above, was shown to have the highest burden of paraquat suicides in the country across all age groups.

The study also found no evidence for method substitution, or the use of other toxic pesticides or other suicide methods after Taiwan has banned paraquat use. More importantly, the results showed no obvious change in agricultural crop yields even after paraquat has been banned from the country.

Previous evidence has shown that the number of suicides in Samoa after paraquat was first introduced into the country. In fact, suicide rates increased by as much as 367%, only dropping after the control of paraquat sales began. But even then, suicide by paraquat ingestion still accounted for between 50% and 60% of fatal suicide cases from 1999-2000.

However, prior to these efforts to control the availability of paraquat, the herbicide was heavily scrutinized for being used as a common suicide agent in 70% of all cases from 1979 and 2000.

In 2008-2011, after three highly hazardous pesticides were banned in Sri Lanka, including dimethoate, fenthion, and paraquat, a 50 and 21% drop in pesticide and overall suicide rates were observed, respectively.

This was proven when a previous study reported that the ban on the toxic pesticides indeed reduced the national suicide rate in the country. Moreover, another Sri Lankan study revealed that intentional poisoning by paraquat often stems from impulsive behavior rather than deliberate planning. It was also observed that a large percentage of intentional and unintentional paraquat poisoning occurred during the most common time of use of paraquat in Sri Lanka.

Trinidad & Tobago has suicide rates that are much higher compared to its English-speaking Caribbean neighbors. Many of these suicide cases involved paraquat. In an epidemiological evaluation conducted on 270 patients who presented with deliberate self-poisoning between 1986 and 1990, paraquat was responsible for 63% of the suicidal cases.

Other agrochemicals available in the country were only used in 20% of self-poisonings. Another forensic analysis of suicidal paraquat ingestion from 1996 to 1997 in South Trinidad revealed that out of 105 deaths, paraquat was the causative agent in 80 cases, or as much as 76% of the fatalities.

Another research that reviewed suicidal deaths in the area with the greatest agricultural activity in the country also identified paraquat as the most commonly used suicide agent. Of 48 cases of suicide during that year, 39 (81.3%) were due to paraquat intoxication.

The said study also found that young people of East Indian origin were particularly vulnerable to the use of paraquat in suicide, as they accounted for 89% of the suicide victims.

The impact of paraquat as a means of suicide is not only felt in developing countries, but also in developed countries, such as South Korea. The country is also known to have the highest annual suicide rate among developed nations.

As a result, the researchers speculate that one possible reason behind this substantial reduction in South Korea’s suicide rate was the paraquat prohibition that took effect. Paraquat is the most commonly used suicide agent in the country, accounting for 35.5% of all pesticide-related deaths.

However, the lower concentration of the active ingredient paraquat dichloride in these formulations was not enough to significantly lessen the fatal poisonings involving paraquat in Japan. In fact, in a hospital-based survey of pesticide poisoning cases from 1998 to 2003, researchers found that there were 79 cases of paraquat intoxication, 71 of which were cases of suicide.

Of the suicide cases that involved 5% paraquat + 7% diquat products, over 80% resulted in deaths and all individuals who used 24% paraquat products also completed suicide. Over 80% of these suicide attempts ended in death within the first three days of ingestion. It is worth noting that it has been over a decade since 24% paraquat formulations were last sold in the country before its sales were prohibited.

Despite the fact, eight cases of suicide using those products were still recorded from the time of the survey (1998-2003). This implies that some farming families stored the 24% paraquat products for more than a decade. 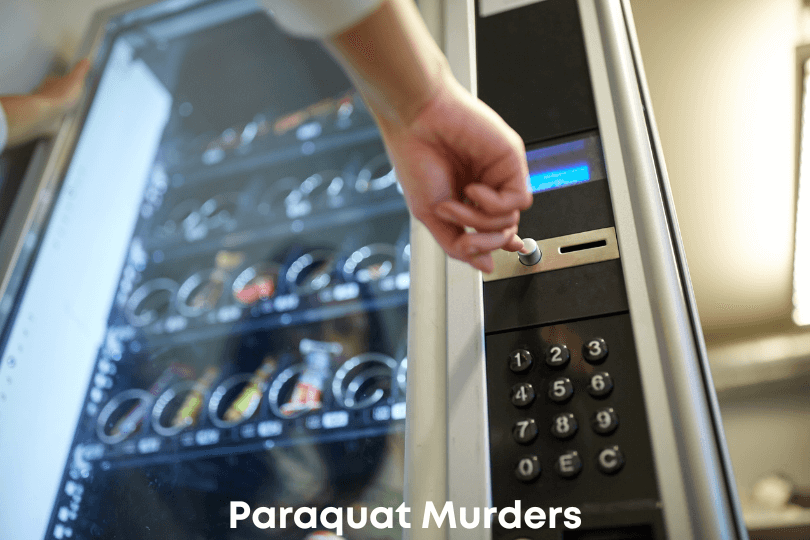 The paraquat murders were a wave of poisonings across Japan that took place in 1985. The suspect targeted vending machine customers by slipping paraquat into beverage bottles sitting in the vending machine’s dispensing slot, earning the moniker “Vending Machine Killer.”

Of the 34 incidents linked to the paraquat murders, 13 resulted in death, while the remaining victims were left in seriously bad shape after consuming beverages that were laced with the toxic herbicide paraquat.

As the murders reached the media, the majority of Japanese citizens were horrified to learn about the poisonings. Oddly enough, however, the killer also inspired other copycat poisoners at the time, who then began to leave beverages containing minor toxins, such as sulfur and lime around public Japan.

There was also a series of paraquat-induced suicides that followed after the incidents of poisonings gained publicity. Many believe that this was most likely due to the word coming out about how toxic paraquat is.

Unfortunately, due to a lack of security cameras during the time the paraquat murders were committed, Japanese police had little to no evidence to work with. That said, the vending machine killer remains unidentified to this day.

Where is Paraquat Banned?

Paraquat is highly acutely toxic and no antidote exists for it up to this day. And because of its reputation as an extremely hazardous chemical, it has been unsurprisingly targeted for banning or more strict controls in various countries worldwide. According to Pesticide Action Network UK (PAN UK), almost 60 countries have now banned paraquat with no significant impact on agricultural production. Some of the countries that have banned paraquat use are listed below.