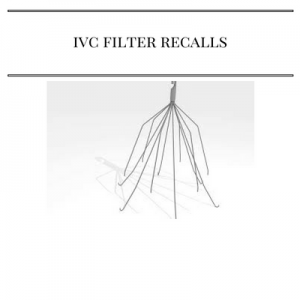 Complications surrounding the implantation and failures of inferior vena cava filters have led to hundreds of individual and class action lawsuits around the country.

The IVC filter is designed to trap blood clots before they can enter the heart and lungs, causing embolisms that could lead to death.

However, due to faulty filters, manufacturers have been sued due to complications caused by them.

Due to the frequent issues caused by IVC filters, those involved in litigation wonder when the Federal Drug Administration will recall all the problematic filters.

Cook Medical and C.R. Bard are both being sued in multidistrict litigation cases to be heard in 2017, but so far there hasn’t been a recall on their devices. However, some devices have been recalled by manufacturers in the past.

You can find out more about IVC filter complications on this page.

In April 2013, the Cordis Corporation began recalling their OptEase retrievable filters because they felt the implantation instructions may have not been clear enough and some healthcare providers could insert them backwards.

They begin the recall by issuing an “Urgent Medical Device Correction” letter to their customers. The letter gave further instructions to prevent the devices from being implanted backwards.

The Federal Drug Administration classified the recall as Class 1, meaning the device could cause severe injury or death.

There were two recalls issued on Greenfield IVC filters. The first one was issued August 2005 on the titanium Greenfield filter and was classified by the FDA as a Class 2 recall.

The second recall, a Class 1, was issued in December 2005 for the stainless-steel Greenfield IVC filter because it could detach during implantation. This could cause a clot to get past the device and lead to a cardiac or pulmonary embolism.

Another consequence could be a detached piece of the device could migrate and embed itself somewhere else in the body or it could protrude through a vessel. Though there are several lawsuits pending, there haven’t announcements of other IVC filter recalls.