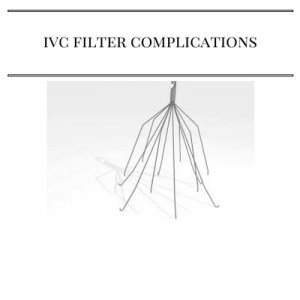 Any surgical procedure can be dangerous and lead to complications, including the placement of the inferior vena cava filter. The IVC filter is placed in patients who have had issues with repeated blood clots leading to issues like deep vein thrombosis or pulmonary embolisms which have not been successfully treated with anticoagulant drugs.

However, many complications have developed with the placement of IVC filters, both short-term problems and long-term complications. Hence, many lawsuits were filed.

There can be complications with any percutaneous procedure like the placement of the IVC filter. Some of the common short-term side effects include:

• An allergic reaction to the contrast agent.
• Heart arrhythmia.
• Air embolism, which is when a vein or artery is blocked by an air or gas bubble.
• A collapsed lung, called a pneumothorax.
• Infection at the insertion site.

However, there are also short-term complications specifically related to the placement of the IVC filter. The filter has to be guided to the insertion site within the inferior vena cava, which is the largest vein in the body, and the filter is implanted just below the kidneys.

The short-term complications associated with the IVC filter center around the placement. Some of the issues with the placement of the filter have been:

• The filter not completing opening, which prevents it from stopping blood clots.
• Tilting or being placed at an angle.
• Putting the filter in the wrong place.
• The guide wire getting stuck as it is being moved to the correct area to place the filter or as it is being retrieved.
• Embolization, which is components detaching from the device.
• A pulmonary embolism.

There are also long-term complications associated with the placement, or misplacement, of the IVC filter.

The main complication associated with the insertion of the IVC filter is its migration. In fact, 35% of all complaints are regarding filter migration. The filter may be inserted in the correct place and deployed, but it doesn’t stay in place. Instead, it drifts to another location within the inferior vena cava.

Since it is the longest vein in the body, it could drift far from the point of insertion and block the vein.

The second most common complication is the embolization of the device. When parts detach or break off from the filter, they can migrate within the vein and cause side effects like penetration of the vein, block the vein and allow clots to get past the device. The clots can cause pulmonary embolisms, which can result in the death of patients.

Many IVC filter models are made to be removed after the threat of pulmonary embolisms, PEs, have past, but they are often left in place. In 2014, the Federal Drug Administration issued a safety communication stating the IVC filters should be removed 29 to 54 days after they were implanted once the risk of PEs had past.

However, studies have found only about 12% of the filters implanted are removed.

Sometimes the filters were not removed because they couldn’t be retrieved since they had embedded into the vein, some had protruded through vessels or others had moved and were in abnormal positions. The failure or movement also caused PEs. The main side effects of PEs are difficulty breathing, cheat pain and death.

As a result of the complications, several lawsuits have been filed against the manufacturers of IVC filters (like Bard and Cook) or doctors who implanted them. Both individual and class action lawsuits were filed, but most of them were consolidated in 2014. However, there are still active lawsuits to date. You can find out the latest IVC Filter Lawsuit Updates in 2018.