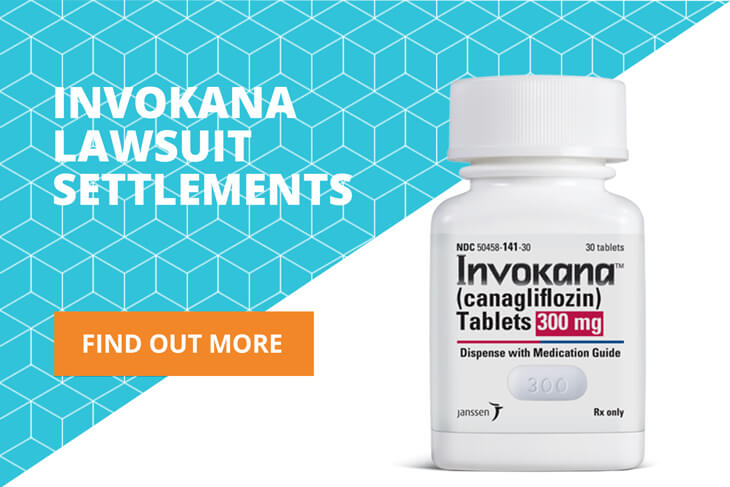 While there is no definitive settlement or lawsuit judgement related to Invokana, hundreds of people who were impacted by the drug are filing Invokana lawsuits against the company responsible for its creation and production.

The company that is involved in the lawsuits is Janssen Pharmaceuticals, a subsidiary of Johnson & Johnson.

The reason behind these lawsuits and potential future settlements is the range of side effects that emanated from the type-2 diabetes drug, and were not disclosed by the manufacturer. The side effects range from blood acid collection to amputations.

Invokana is a SGLT2 inhibitor produced in the United States, and it is used to help adults deal with type-2 diabetes. It is a pill that is proven to lower the blood sugar in a diabetic’s body. The pill is taken one time a day, with the manufacturer claiming that a single daily pill produces better results as compared to the competitors – such as Januvia.

One of the side effects listed by the manufacturer is weight loss of between two to three percent, even though the drug is not a prescribed weight loss medicine. It is also said to lower blood pressure anywhere from three to five mmHg. Issues with the urinary tract are also mentioned as one of the more common side effects form Invokana. However, none of the more serious side effects, which are mentioned in various lawsuits, are listed by the manufacturer.

The mild side effects are the least of the problems associated with Invokana. If the worst thing that happened was a urinary tract infection or some weight loss, no one would be filing a lawsuit against the company. The reason why lawsuits are so prevalent is due to the side effects such as rashes, dizziness, kidney damage, bone fractures, ketoacidosis, pancreatitis, and resulting amputations from complications within the body.

Diabetics around the nation who were recommended Invokana by doctors based on faulty information from the manufacturer, could not believe when they reached a point where a limb was on the line. Imagine telling a patient their blood sugar can be controlled, but it would result in them losing a toe, foot or leg.

Would those patients have accepted those odds? There is a good chance that 99 percent of those patients would have taken the supposedly inferior Januvia, which does not pose a risk of amputations.

But how was the link discovered, between the drug and increased risk of amputations? It came out of a study that claimed Invokana was increasing the risk of the patient suffering a heart attack. But what the study concluded was that among the group of people who were taking Invokana, the risk of an amputation was far higher as compared to the other group who were on the placebo.

Doctors are not even sure why it is leading to so many cases of amputations. But even if they did find the reason, it would not help the hundreds of patients who lost a toe, leg or foot because they were given what they assumed was a safe pill to help control their blood sugar.

Unlike some of the other lawsuits filed against pharmaceutical companies, the Invokana lawsuits are not a class action. The reason why a class action is not on the table is because the individual plaintiffs may not want to lose control over their own case.

Some plaintiffs may want to settle, while others want to go to court and get a verdict against Janssen Pharmaceuticals. Simply because all the cases are being concentrated into a single court does not mean they are linked. They will still be tried individually.

A class action is a completely different kettle of fish. While all the plaintiffs would receive a financial settlement in the event of a compromise or verdict, they do not have much control over the outcomes.

In fact, many plaintiffs who find themselves involved with class actions complain they have no idea what is going on. Some do not even know that a trial is proceeding, or settlement talks are underway. They only get information when there is a conclusion to the case.

If you or someone that you love was impacted by taking Invokana, it is important to file a case very soon. As mentioned, the first bellwether trials are getting underway are scheduled for 2019. And it is also crucial to remember that a statute of limitation exists on such lawsuits. It is always best to explore legal options soon after a negative incident, such as a serious illness or amputation after taking Invokana.

2023 Status of Financial Settlements in the Invokana Lawsuit

Everyone is anxious to learn about the state of the lawsuits, whether they have already filed or they are in the process of filing. When the first bellwether trial results come in, we will be updating this page with all the results. The first trials are scheduled for 2019, but more information about the lawsuit and potential settlements should filter through before those trials begin.