Have you been using GranuFlo?

Both GranuFlo and NaturaLyte are products that are used in thousands of dialysis centers across the country. After many patients began to suffer from heart problems- some of them fatal- family members of these patients began to file NaturaLyte and GranuFlo lawsuits against the manufacturer, Fresenius Medical. Evidence points to the fact that Fresenius Medical actually knew about the potential dangers of these medications, but did not share this information with patients and healthcare providers.

Reasons to File a NaturaLyte or GranuFlo Lawsuit

NaturaLyte and GranuFlo are brand names of dialysates that are manufactured by Fresenius Medical Care. Fresenius is the world’s largest provider of dialysis products and services. Their products and services are used in thousands of dialysis centers to treat American patients who are suffering from kidney failure or disease. However, after investigating the harmful effects of these products, the Food and Drug Administration released a Class I recall of both of these products in March 2012 in order to revise the prescribing instructions. The recall stated that the use of these two products can result in low blood pressure and even cardiac arrhythmia. These conditions could result in cardiopulmonary arrest or other conditions, even including death. 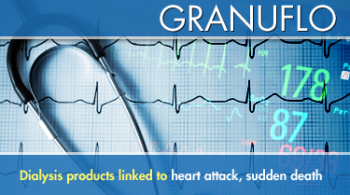 At some point, some evidence has surfaced that reveals Fresenius Medical was very aware of the dangers these drugs posed to patients, but failed to share this knowledge with patients or the medical community. An internal memo at Fresenius Medical from November 2011 stated that over 900 patients had experienced heart attacks after using these products during 2010. Additionally, the memo states that the medical staff concluded that patients who have excessive levels of bicarbonate in their blood were 6 times more likely to experience cardiac arrest than those patients who were in normal levels. This memo also found a link with GranuFlo and increased bicarbonate levels, leading to heart attacks. This proof was enough to compel people to start filing NaturaLyte and GranuFlo lawsuits.

Permanent Injury/Damage Due to GranuFlo and NaturaLyte

There are a growing number of individuals who have been injured by these dangerous products. These injuries have resulted in NaturaLyte and GranuFlo lawsuits being filed against Fresenius Medical. The plaintiffs in these cases allege that the manufacturer intentionally, recklessly, and negligently suppressed, concealed, misrepresented, and even omitted the dangers, risks, disadvantages, and defects of both GranuFlo and NaturaLyte.

The NaturaLyte and GranuFlo lawsuits against Fresenius claim that these products caused permanent, severe damaged and injuries including the following:

Cardiac Side Effects of NaturaLyte and GranuFlo

For those patients who have diminished kidney function or even failure, hemodialysis treatment allows them to have lives that are somewhat normal. This treatment is usually performed three times each week, and involved removing the blood from the patient, running it through a dialyzer. A dialyzer is a filtering machine that is sometimes referred to as an artificial kidney. A chemical solution that is referred to as a dialysate removes the waste products from the blood and cleanses it. The blood is then pumped back into the patient.

GranuFlo is a powdered compound, and NaturaLyte is a liquid compound that creates bicarbonate. The compound bicarbonate is a major ingredient in the process of dialysis. When excessive levels of bicarbonate build up in patients who use GranuFlo or NaturaLyte, very serious problems resulting from the chemical compositions of these compounds can occur. These problems can result in pain or other complications.

RenalWEB, which is a site that tracks the dialysis industry, has found that the compositions of both NaturaLyte and GranuFlo are unique because they use sodium diacetate instead of the traditional sodium monoacetate. Due to this special composition, higher levels of bicarbonate can be produced when the products are administered at the same dosage levels as the typical dialysate.

An increased level of bicarbonate in the bloodstream can result in a condition that is referred to as alkalosis. This occurs when the pH level of the blood leans toward the alkaline end of the scale. Since the kidneys are responsible for maintaining the acid to alkaline balance in the bloodstream, it is critical to maintain bicarbonate levels during the process of dialysis. Additionally, too much acidity in the blood, called acidosis can also result in serious damage to the internal organs.

Alkalosis can cause serious health issues, including the following:

Status of Lawsuits Regarding GranuFlo and NaturaLyte

Over 1,800 of the NaturaLyte and GranuFlo lawsuits against Fresenius Medical have been combined into an MDL in the District of Massachusetts. An MDL is a “multi-district litigation” and combines several lawsuits (in this case, GranuFlo lawsuits) into one pre-trial proceeding to make the process go much faster. US District Judge Douglas P. Woodlock is presiding over this MDL. The first trial is set on the docket for January 2016- a second trial will begin just one month after that, in February 2016.

Fresenius Medical, which is located in Waltham, Massachusetts, did not have any objections to the GranuFlo lawsuit being changed into an MDL in the state of Massachusetts.

The transfer order makes the statement that all of the actions have common factual questions that come out of the allegations of the injuries suffered by the plaintiffs or the loved ones of those patients who suffered death due to GranuFlo or NaturaLyte during their dialysis products. They allege that these products resulted in metabolic alkalosis in those patients which resulted in low blood pressure, hypoxemia, hypokalemia, cardiac arrhythmia, hypercapnia, or cardiopulmonary arrest.

Some attorneys are making the claim that hundreds more clients across several other states are ready to file their own GranuFlo lawsuit.

In the NaturaLyte or GranuFlo lawsuits, there are several allegations that are being brought against Fresenius- most specifically, that the company did know about the dangerous nature of these products and failed to inform the patients or the medical community of these dangers. Additionally, Fresenius Medical Care has been accused of purposefully putting patients at risk for injury by not warning health care professionals and offering proper training in using these dialysis products safely.

The complaint that was filed in September 2012 by injured parties makes the claim that Fresenius Medical did the following:

The exact number of NaturaLyte and GranuFlo lawsuits related to these products is not known at this time. However, families that have lost a loved one due to cardiac arrest have filed lawsuits related to the fact that the products create excessive levels of bicarbonate. While it is true that bicarbonate is an essential element in the dialysis regimen, an excessive level of it can lead to more serious health problems, including an increased risk of cardiac problems and even death. The chemical composition of NaturaLyte and GranuFlo encourages an overabundance of bicarbonate in the body.

Following are three specific cases regarding these products.

In July 2012, Arthurine Williams, a resident of Alabama filed a GranuFlo lawsuit against Fresenius Medical on behalf of her deceased husband, Johnny, in the US District Court in the Northern District of Alabama. The claim states that her husband, Johnny, underwent a dialysis treatment in July 2010, using GranuFlo and then had a heart attack the following day. Arthurine says that Fresenius Medical officials were aware of the risks posed by GranuFlo and NaturaLyte in heart attack and death.

One month later, in August 2012, Betty Lemmond filed a suit against Fresenius in the same court on behalf of her deceased husband, Dizzy Dean. He died of a heart attack in August 2010, the same day he received a dialysis treatment using GranuFlo. Betty’s lawsuit claims that Fresenius Medical was negligent, wonton, fraudulent, and unjustly failed to warn patients about the dangers of these products.

Waddell Bishop filed a GranuFlo lawsuit against Fresenius on behalf of his deceased mother in September 2012. This lawsuit was filed in the US District Court for the Southern District of Georgia. Frances Carol Bishop received a dialysis treatment in September 2010 and died of a heart attack later that same month. Waddell Bishop claims that his mother’s death was a direct result of using GranuFlo and/or NaturaLyte in dialysis treatments.

What are Your Rights?

If you or a loved one has suffered injury or even death, you should speak with a product liability attorney to find out what your options are. You do have rights and deserve to have those rights protected. An attorney can help you determine if you or your loved one is able to file a NaturaLyte or GranuFlo lawsuit.