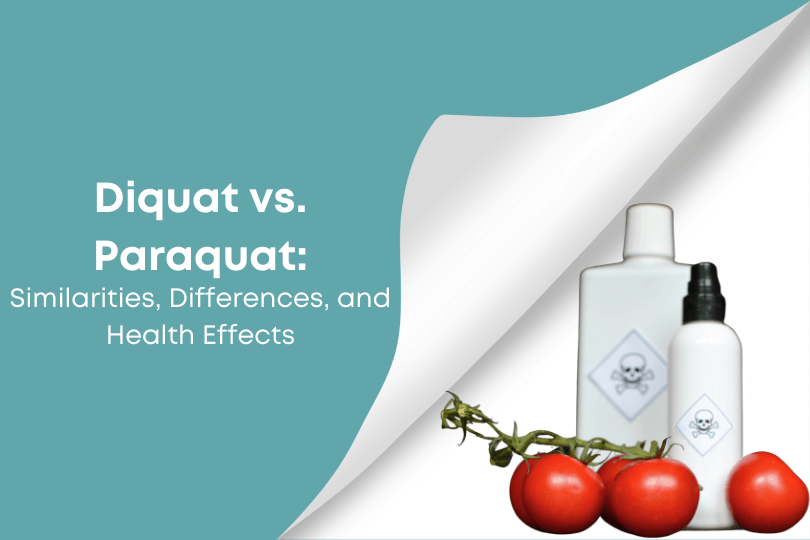 Diquat and paraquat are two widely used herbicides whose popularity can be attributed to the speed and efficacy with which they act. However, these two chemicals are not only popular because of their effectiveness.

Diquat and paraquat also gained notoriety for the exact opposite reason – the illnesses attributed to their use. In fact, people who suffered from Parkinson’s disease due to paraquat exposure have filed a paraquat herbicide lawsuit to recover damages for the injuries they suffered.

Research has also shown that in the United States, paraquat or diquat was responsible for a large number of herbicide-related illnesses and eventual deaths due to accidental or intentional ingestion. This begs the question, how are the two chemicals different?

Read on to find out the similarities and differences between diquat and paraquat, and the most common reasons behind the illnesses attributed to the two popular herbicides’ use.

Is Diquat The Same as Paraquat?

Product formulations vary by country, but both diquat and paraquat are marketed in the United States, where paraquat poisonings far exceed cases of diquat poisonings. 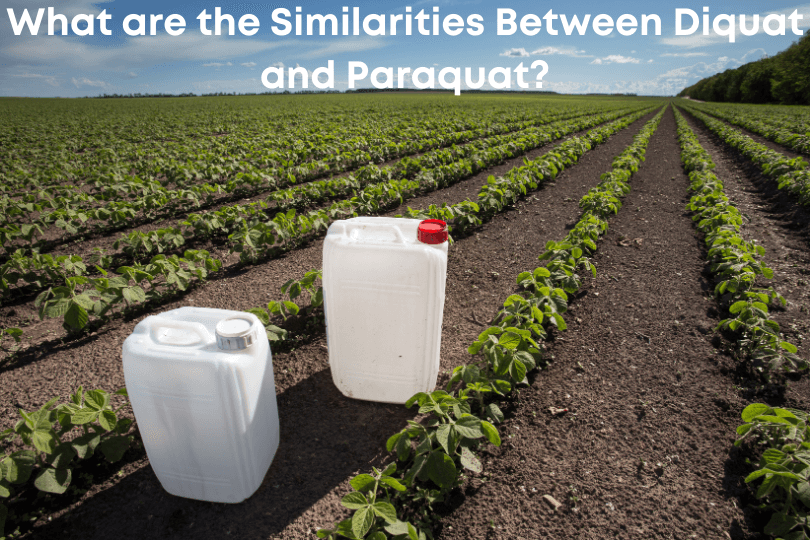 What are the Similarities Between Diquat and Paraquat?

Diquat and paraquat belong in a family of chemical compounds called bipyridines, that’s why it comes with little surprise that they possess certain similar qualities. The similarities between diquat and paraquat are listed below.

In their purest form, diquat and paraquat salts are both odorless, crystalline powders with a yellowish appearance. These pure forms, or technical grades, however, are not sold because they are highly toxic and are only used in analytical and toxicological studies.

Diquat and paraquat are non-selective contact herbicides that are used to control broad-leaved weeds and grasses and as pre harvest desiccant and/or defoliants. Additionally, diquat is used for aquatic weed control in public waters. Even though in some countries, paraquat is used for the same purpose, in the United States, it is not permitted to use the chemical as an aquatic herbicide because of its adverse effects on aquatic organisms. It is worth noting, however, that in the States and various other countries, paraquat is more widely used in the agricultural and forestry industries than diquat.

3. Both Are Highly Toxic

Both of these widely used herbicides are extremely poisonous, but paraquat has long been known as one of the most toxic herbicides used in agriculture. And although diquat is slightly less toxic than paraquat, this fact might be of little comfort as concentrated solutions of diquat are still highly toxic and chronic exposure can lead to eventual death.

Dipyridyl herbicides such as diquat and paraquat can cause systemic toxicity and lead to various similar symptoms depending on the route of exposure. For instance, when these corrosive herbicides are ingested, they can cause vomiting and caustic injury to the esophagus, oropharynx, and gastrointestinal tract. The toxic effects of diquat and paraquat can result in multiple system organ damage and even death.

With both diquat and paraquat, initial clinical signs of ingestion are similar because of their corrosive effect on tissues. Early symptoms of ingested diquat or paraquat include pain and swelling in the mouth and throat, abdominal pain, tongue sores, nausea and vomiting, and bloody diarrhea.

Diquat and paraquat are rapid acting herbicides that work by producing highly reactive free radicals, allowing them to interfere with photosynthesis and eventually disrupting cell membranes, which ultimately results in cell death and tissue destruction. This mode of action is thought to be the same mechanism in which these highly toxic herbicides destroy human cells.

Ways of removing diquat or paraquat from the body may vary depending on the route of exposure. For instance, if you got these chemicals in your skin and eyes, you should remove the contaminated clothing and wash the exposed skin with soap and water for 15 minutes. You should also flush the exposed eyes with water for the same amount of time. On the other hand, if you swallow paraquat, you should rinse your mouth and ingest some food if activated charcoal is not readily available.

Even with the medical advancement that we enjoy today, there is still no available cure for poisoning by diquat or paraquat. Various studies in recent years have examined proposed treatments for dipyridyl herbicides, but to no avail. Today, many facilities use adsorbents such as activated charcoal or Fuller’s earth in the management of paraquat or diquat ingestion.

What are the Differences Between Diquat and Paraquat?

There are certain distinctions between the two structurally related herbicides that make them a different product from each other. As they often say, not all chemicals and formulations are created equal. The differences between diquat and paraquat are listed below.

One main distinction between diquat and paraquat is the color of their aqueous solutions or their liquid forms in which they are marketed. While diquat is a dark reddish-brown liquid, the form of paraquat sold in the United States is injected with a blue dye to keep it from being confused with other beverages and to avoid cases of poisoning.

Unlike paraquat, diquat is not taken up and concentrated by pulmonary alveolar cells. Therefore, diquat does not accumulate in the lungs and does not cause pulmonary fibrosis.

Even though diquat is slightly less toxic than paraquat, deaths have been reported following ingestion of 15, 20, and 50 mL of a 20% diquat solution. In the case of paraquat, however, ingesting as little as 2-4 g, or 10-20 mL of a concentrated 20% paraquat solution can lead to death.

Diquat and paraquat are known to target the same unwanted plants or vegetation. However, paraquat has been shown to have increased activity on grasses while diquat has more activity on broadleaf weeds.

5. Illnesses Attributed to Use

The most common health effects attributed to paraquat use are skin, eye, and neurological symptoms, with Parkinson’s disease being its most severe and controversial consequence. On the other hand, diquat use is associated with agitation, seizures, coma, as well as cerebral and brainstem hemorrhagic infarctions.

6. Most Common Causes of Illness

According to research, diquat and paraquat are implicated in up to 85% of herbicide-related deaths in the U.S. The most common causes behind people getting sick from paraquat include failure to wear personal protective equipment (PPE), spray drift from pesticide application sites, and accidental spills or splashes. For diquat, the most common causes of illness were application equipment failure and accidental spills or splashes.

Among others, the most popular brand name for paraquat is Gramoxone, while diquat is most commonly known as Reglone in the herbicide market. Over the years, however, other chemical manufacturers also started selling various other diquat- and paraquat-containing products. As a result, other trade names for the herbicides have also long existed and have been available for purchase ever since. For instance, other brand names for paraquat include Bonfire, Firestorm, Helmquat, and Parazone, while other commercial products containing diquat include Chemsico, Aquacide, Dextrone, and Weedtrine-D. 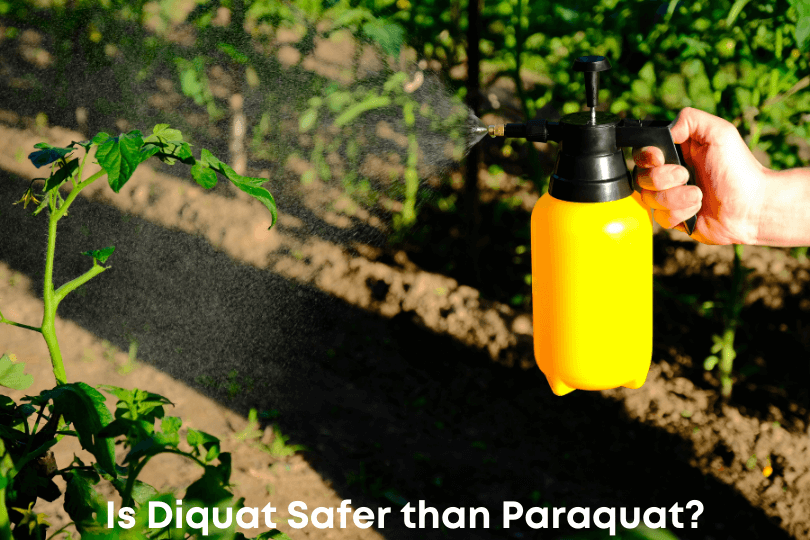 Is Diquat Safer than Paraquat?

Yes, diquat is somehow safer than paraquat. It is known to be less damaging to the skin compared to paraquat, but can cause severe eye irritation and can be toxic or fatal if inhaled or swallowed.

That said, even though diquat is generally considered to be less toxic, this fact may only be of little comfort because it is still extremely poisonous and should therefore be used with the utmost caution.

Yes, diquat is banned in the European Union (EU) and is no longer approved for use in EU member states. In 2019, the EU banned diquat and withdrew licenses for domestic use of products containing the chemical.

The organization set the final use date of existing stock in February 2020. The decision to ban diquat stemmed from concerns related to the exposure of residents and bystanders and its adverse effects on bird life.