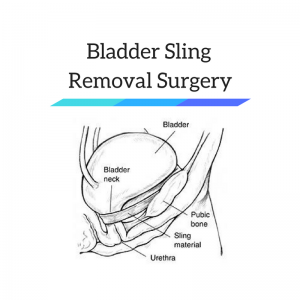 Many people who had bladder sling surgery have experienced complications which require the removal of the device. The sling, which is a synthetic mesh strip made from polypropylene, may not have been placed correctly and patients are still having issues with stress urinary incontinence or their urethra doesn’t completely empty, which can cause urinary tract infections.

Bladder slings may also need to be removed because they have contracted over time and are causing extreme pain and/or painful sexual intercourse. Some patients have had their slings erode into the organs surrounding the mesh, which can sometimes make removal almost impossible.

The two most common complications are vaginal extrusion and urethral erosion. Urethral erosion, which is when the mesh erodes into the urethra or other surrounding organs, may occur due to placing the sling too close to the urethra’s spongy tissue called the mucosa. It may also be caused by the sling being too tight and causing ischemic necrosis.

With vaginal extrusion, the bladder sling may have eroded through skin and tissues into the vagina. Most women will have symptoms of extrusion or erosion such as painful sexual intercourse, vaginal bleeding, infections, prolapse reoccurrence and pain.

When the bladder sling needs to be removed to replace it or due to serious complications, which is called revision surgery, sometimes multiple surgeries are needed to remove a sling which has eroded or extruded into other tissues or organs. Sometimes it cannot be removed in its entirety, so part of the mesh will remain in the patient.

When the mesh cannot be removed completely, there are several complications which can develop, including:

One of the complications after bladder sling revision surgery is a bloated abdomen and flatulence. Some of the bloating may be caused by gas, which can be helped by avoiding carbonated drinks and walking more often or further every day for exercise.

However, a bloated abdomen can be indicative of a more severe complication and patients should report it to their doctor if the bloating doesn’t resolve on its own.

Since infections and fistulas are complications of bladder sling revision surgeries, it can affect how the patient’s urine smells. If the infection or fistula is undergoing treatment, the smell should clear up as the infection begins to heal.

However, if the complication hasn’t been discovered, the patient needs to report foul-smelling urine so any infections or fistulas can be found and treated.

Sometimes if the urethra has been severely eroded, a catheter may need to be placed to help with urination. In some cases, patients can get infections from the catheters, which can result in bad smelling urine.

Patients who notice bad smelling urine should report it right away after their surgery so the cause can be diagnosed and the problem treated.

Due to the complications associated with the use of synthetic mesh in surgeries, lawsuits against the manufacturers of the slings have been filed. If you’ve had bladder sling removal surgery, you should contact an attorney about compensation for the injuries you received.