Is big Pharma waging a war on medical marijuana? 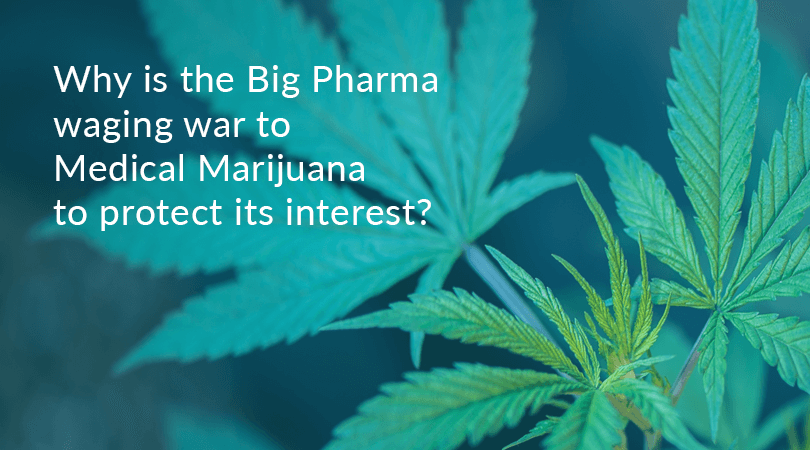 The legalization of medical marijuana for clinical purposes is a serious threat to the entrenched interests of many pharmaceutical companies.

Their attempt at stopping it from reaching the market comes to no surprise then.

But aren’t they supposed to protect our health by providing humanity with new ways to treat our conditions at a fair and affordable price? Once again, it really looks like their lust for profit is their only priority, but let’s dig deeper to see if these accusations are nothing but a conspiracy theory.

There’s an endless amount of clinical studies that prove how medical marijuana can be used as a surprisingly effective therapy to treat a wide range of different conditions. From chronic pain, to children epilepsy, post-traumatic stress disorder (PTSD), and fibromyalgia, medical cannabis can be the answer many desperate patients were longing for.

Despite its risks (that nobody ever ignored), this natural remedy is often safer than the medications that are currently used to treat most of these conditions.

It is also associated with less or, at least, more tolerable side effects, so it quickly became many patients’ favorite choice.

And here comes the biggest issue..

Marijuana is a natural remedy, so no single entity can monopolize its distribution through a copyright or patent.

It means that since it is a much more cost-effective alternative to traditional treatments, it could cause the pharmaceutical industry to lose a whopping 1% of the total market.

And while this number really seems just a fraction of the actual market, their profits will take a huge hit, with losses that have already been estimated at a minimum of $166 million.

Just think about the abhorrent opioid epidemic that recently hit the United States. Marijuana can be used to treat chronic pain without the serious risk of addiction and overdose associated with the opioid painkillers, and it’s much more effective than an old-school NSAID such as ibuprofen.

If they never cared about poisoning an entire nation with such dangerous medications, why should they care about patient’s health now when so much of their money is at stake?

Back in 2001, 40 pharmaceutical companies allied to stop South Africa from producing generic HIV/AIDS medications that would have saved millions of people.

If even one single African country started producing antiretroviral drugs, their prices would have dropped significantly. The Big Pharma alliance dragged the entire South African government to court by filing an international lawsuit.

They didn’t care about the lives of so many children who had to struggle with AIDS since birth. They cared about their money.

And if they didn’t stop with HIV, why should they stop now with marijuana?